I’m sitting here waiting for my boyfriend of 5 months to call me, like he always does after he gets off from work. His hours vary, so I just go about my business with an ear out for his special ringtone that I’ve assigned to him.

But as the minutes tick by, I start to get anxious, just like I did when I was a young girl, waiting for my dad to come home from his weekly Tuesday evening out. He (now deceased over 30 years) was the king of introverts and loved his alone time. He’d even go to movies all by himself, which I admire greatly.

The anxiety? Yeah, that stuff runs in my veins.

Maybe today is the day that my boyfriend dumps me, I start to think. Or else he got hurt while cutting tomatoes or something like that. My mind is a hatchery for negative thought eggs that smell like sulfur when they crack open.

Being in a new relationship after being cheated on and emotionally manipulated, abused and used for 15 years…let’s just say that my baggage is heavy and my self-esteem is as delicate as a house of cards, my mental health is teetering. 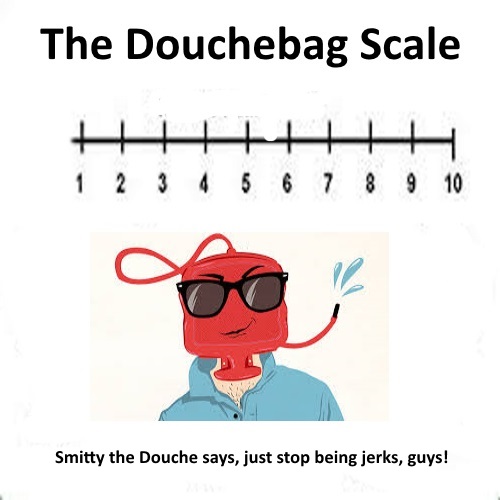 I had a philosophy that I now realize is offensive to men, I called it The Douchebag Scale.

Every man on earth automatically receives an initial score of 1, just because they have a penis.

The score goes up if the male acts like a fucking jerk. Most jerks are actually douchebags, if I may be so bold.

Even my dad who was like the nicest guy ever, he was a level 2 douchebag because he sometimes upset my mom by being a jerk!

My brother is a level 4 douchebag. If you’re under a 5, it’s not considered as a full-blown DB.

My first abuser is a 10. He is a controlling, demanding, manipulative, perverted, cruel monster who still haunts my nightmares after almost two decades.

The second one was a moderately safe DB at 5, until he started graduating from level to level, which put him into a close tie with my first trauma provider, at an evil 9.

I see now how awful this idea of mine was. It’s the same as men saying that every baby girl born in the world gets an automatic 1 on the bitch scale.

But honestly, I’m about a 3 myself and I’ve known a ton of total bitches.

I made it up mostly to make my coworkers and friends laugh. And it worked.

Come on, that was funny.

Don’t be a douche.